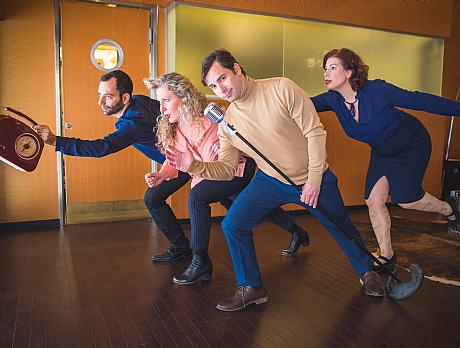 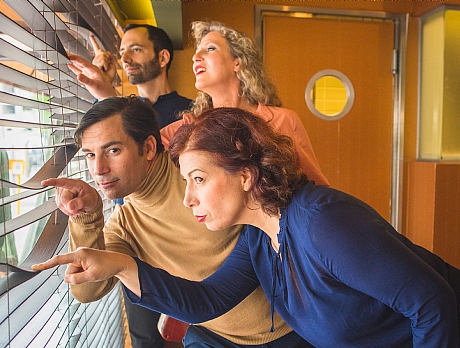 RADIO PLAY: THE IMMORTAL STORY OF THE SECRET AGENT PATRICK KIM AND HIS THRILLING ADVENTURES. A WILD HUMORISTIC THEATRICAL ADAPTATION OF A RADIO PLAY PERFORMED WITH OBJECT THEATER & SOUND EFFECTS

THE BOOK SERIES: "Patrick Kim" is a series of books that were published in Israel from the 60th till the 80th. This is a Pulp fiction novel, combining Cold War dramas, Karate fighting and sex scenes. The book was a bestseller and over three hundred books were published by more than eight different writers by the Pseudonym - Bert Vitford.

RADIO PLAY & OBJECT THEATRE: In the "Radio days" - Radio plays sound effects were made by objects. When the digital era started sound samples were used instead. The show imitates a Radio play on stage and Object theatre is being used to create a visual irony between the objects, the sounds and the actors’ actions.

HANUT31 - THEATRE & GALLERY: A multidisciplinary theatre inside a small shop in southern Tel-Aviv. Hanut31 has a residency program that develops new visual language for the stage. Hanut31 has an Art gallery presenting contemporary art on the shop windows to the street.